The Pharmacy “Skeeted” Me On Testosterone! Why??

So you’re down to your two last doses of Testosterone and you don’t have enough… you’re One and a Half CC’s short! How does this happen? Doesn’t the pharmacy check these things before they send them out? Maybe it’s not the pharmacy

Today we’re going to address the phenomenon of why does my testosterone run out before I should have before I finished my injections.

This is something that we probably have 15 to 20 times a week from people who are pissed off at the pharmacy for sheeting them on testosterone. When in reality that is not the case. The pharmacies we use are very large pharmacies, you don’t have Joe over in the corner with a syringe filling these vials, this is all done with machines. It’s all weighed out precisely all of this stuff is calculated down to the nano gram. These are professional, multimillion dollar facilities that put through thousands upon 10s of thousands of vials of this stuff. They’re not shorting you on your testosterone.

I understand that when you get to the bottom of that vial and you don’t have enough, obviously, that’s going to be your first thought. That’s why I made this video – to address this issue.

Let’s go over why this phenomenon happens and what we can do about it.

So let’s go over what we do. As a rule, we have our first injection and we come in and we take our drawing needle. We have it on our syringe and we pull in one half a CC and now what I do take this off, and I put on My injection needle and I inject that half a cc. Then I go for four

days, Three, Four days later, and I get a new syringe. So I put this in here and I pull out exactly what happened, sec.

Okay, so this vial is now totally empty, and I only have half of a dose now for this injection, and I don’t even have a dose for the next injection so I’m missing one and a half doses out of my vial. Now obviously, I’m going to call a Viking and tell him you know, you shorted me on testosterone. I’ve been very diligent about only taking out half a CC and I’m not doubting that you probably have I believe that 100% but you know where the rest of your testosterone is. It’s in every one of these drawing needles! If you don’t clear the barrel on your drawing syringe, this entire thing 18 gauge needle right here is full of testosterone, which you’re throwing in the trash. And you’re doing that twice a week. So yes, by the time you get to the end of a five-milliliter vial, you’re one and a half weeks shy of where you should be, because you’ve thrown it all away. So how do you get by that?   You take this syringe when you use the drawing syringe, you pull it into the vial, just short of one half of a cc. And then you take it out of the vial, and then you pull the rest from the needle into the syringe which will then make it a half cc because as you’ve seen this experiment, you can be one and a half cc’s short if you don’t clear this barrel every time. 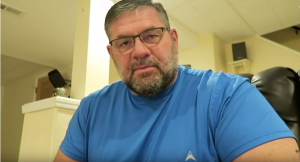