TB 500 and BPC 157 are two remarkable compounds for healing. While some run them for different purposes, I’ve found using them together amplifies the results. Both products are pharmaceutical grade and prescribed through my HRT Clinic, Viking Alternative Medicine. Here’s my healing journey from surgery 10 days prior to looking almost fully healed.

Today we’re going to talk about the healing powers of BPC 157 and TB 500. And not from just from a theoretical perspective… I’m going to actually prove they work.

Now if you watch my channel you know I had blepharoplasty surgery less than 2 weeks ago… 10 days ago to be exact. But for those of you just tuning in, let me get you caught up… I’m talking about eyelid surgery. As we age, many men have loose skin that starts to cover their eyelids.

It’s annoying… and if that’s not bad enough, it makes you look like an old man. And if you think for one second your wife wants to look past your skin bags to see your eyeballs… let’s just say you’re kidding yourself.

So the plastic surgeon slices flesh from your eyelids, removes it, and stitches everything back up to remove the excess skin. As a testament to my progress, I made a video titled “You Need Growth Hormone” on the 5th day after my surgery. And as you can see, while I still had a small pocket of fluid under my right eye, my bruising was gone entirely. That’s not normal.

And today, as you can see, I’ve healed to the point where you’d be hard-pressed to tell I had surgery at all. Again, that’s not normal.

So this brings us to the point where we answer the question “How does a 53 years old man heal like Wolverine?” And the answer is BPC 157 and TB 500. And if you want that healing power doubled, throw those two compounds on top of a regularly administered protocol of Human Growth Hormone.

And let me throw in a side note in here… have you ever wondered why your doctor doesn’t just prescribe these medications automatically after surgery? Right before I was about to have my eyelid surgery the nurse asked me what I did for a living. I told her I owned a few businesses; one of which was an HRT clinic. I told her she was going to be amazed at my rate of recovery because I was going to run BPC and TB daily.

Right after I said that you could have heard a pin drop in the room. She went from Jekyll to Hyde and told me in no uncertain terms if I thought I was going to do anything like that, my surgery would be cancelled…right here… right now. She said my surgeon went to Harvard and Yale and if I thought I knew more about healing than he did… I was sadly mistaken.

So I don’t want to get into an argument, but it might look… like I know what I’m doing…

Now don’t get me wrong… she was a very nice lady… but during the Sermon she gave me, which was extremely awkward, stern, and one-sided… You would have thought I told her I was going to inject my eyeballs with battery acid.

So here’s the thing… yes, you should listen to your doctor. No you shouldn’t listen to me. But you’re not a mindless lemming either. You can see the results for yourself. And this is just one example. Every time I hurt something, rip something, tear something… injure something… I run BPC and TB and it works miracles. In fact, I want you to pay attention to the stories that get posted in the comment section below… I’ll bet there are many testimonials about the healing power of BPC and TB.

Another example… My wife broke her wrist… she had to get a plate and screws surgically implanted. She had TB and BPC prescribed and ran it right after her surgery. She healed so fast they discontinued over half of her physical therapy appointments… told her she didn’t need to come back. When her doctor mentioned the alarming rate at which she was healing… she told him what she was doing. And he looked at her like a deer in headlights.

My question is… Why? Isn’t his job to make sure she heals quickly? How is he a doctor and doesn’t know about these healing peptides? How is my plastic surgeon such an amazing doctor… and everything he does requires healing… yet they all act like Satan himself makes these products in a compounding facility out of the depths of hell…

So no, I’m not a doctor. And no… I’m not giving you medical advice. But just because your doctor doesn’t understand something… doesn’t make it wrong. I mean at one point in time it was common knowledge that the world was flat… that leeches sucking the blood out of your body cured everything that ailed you.

BPC 157 and TB 500. Both pharmaceutical grade, both doctor prescribed, and both available at Viking Alternative Medicine. 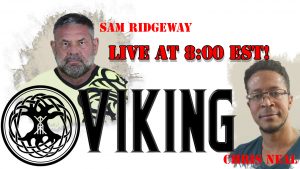